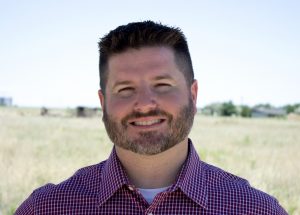 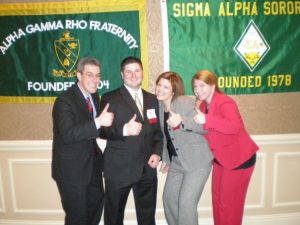 Having recently joined the Executive Team of AgriVision Farm Management in Hartley, TX, as Director of Special Projects, Brad used this life change as an opportunity to re-evaluate his estate plan, specifically the philanthropic priorities included, therein.

Mississippi State University, his alma mater, and Alpha Gamma Rho have long been a part of his plan as their missions align with his values and they have both made a significant impact on his life. While re-evaluating his philanthropic priorities, Brad recalled Sigma Alpha’s mission and pillars also align with his values. Given his connection to the Sorority over the last decade, he felt compelled to support the future of the Sorority by adding the Sigma Alpha Foundation to his will.

While on AGR’s staff, Brad provided encouragement and guidance by sharing fundraising expertise with the Sigma Alpha Foundation Board and staff and was continually exploring ways for the two organizations to work more closely together for mutual benefit. His mentorship, advice and strategic guidance in growing the Foundation has been invaluable.

As a former fundraiser, Brad recognizes the value of estate gifts to the future of an organization and is proud to formally demonstrate his support for Sigma Alpha and his belief in its values through his planned estate gift which is “unrestricted for the Sigma Alpha Educational Foundation to use as it sees fit, with priority direction for leadership seminars or similar experiences.”

According to Brad, “When I reflect on my Alpha Gamma Rho volunteer and staff roles supporting AGR’s Purpose of Making Better Men, I truly believe partnership with Sigma Alpha enhanced the experience for AGR men so it’s only fitting for me to support Sigma Alpha women in a similar fashion. If you’re considering an easy yet impactful way to support the future of Sigma Alpha, I strongly encourage you to join in taking the easy step to formalize your own support.”

A planned gift through your will or estate plan is a simple way to make a meaningful impact and Brad’s is the first of which the Foundation has been notified.  If you already have a will, it can be as simple as making a revision to include a statement allocating a specific dollar amount or remainder percentage directly to the Sigma Alpha Sorority Educational Foundation (legal name).  You’ll also need to include the Foundation’s Federal Taxpayer ID Number/EIN (20-3449981) and address (PO Box 1604, Milwaukee, WI 53201).

If you’ve already included Sigma Alpha in your estate plans or plan to do so in the future, please inform us so that we can properly thank and acknowledge you.